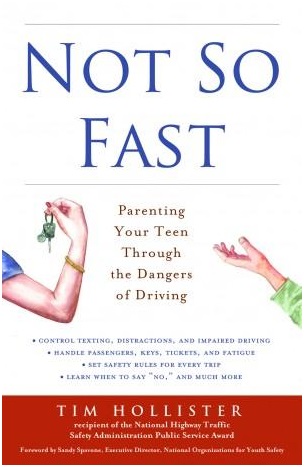 Since well before seat belts or airbags were introduced, driving has been pitched to us as the ultimate and unassailable social freedom. For teens especially, the appeal of a fast car full of friends is pretty deeply entrenched, reinforced as it is by advertising and the entertainment media. If, for example, you’re a parent being asked by your newly licensed teen if they can pile up in a truck with their friends and head to the beach, you might not think twice about letting them go.

The only problem is that, for teens, it’s far more dangerous than we think it is.

“In the last ten years or so, science has pretty well shown that the human brain is not fully developed until we reach about ages 22 through 25,” explains Tim Hollister, the author of Not So Fast, a new book on teen driving safety. “And the last part of the brain that develops is the part that provides judgment and restraint.”

In other words, teen drivers are in far more danger behind the wheel than adults are. Neurologically, teens are not yet hardwired to properly judge the consequences of their actions.

“It’s why we talk about teens as being excitable and impulsive,” says Hollister. “There’s a physical reason for that, and it doesn’t really go away until they reach their mid 20s.”

The science is new, and not many parents understand how much danger a 16-year-old brain can really manage. That doesn’t change the facts: Teen drivers cause twice as many accidents as any other age group. The presence of other teens in the car dramatically increases the risk of a crash. Almost half of all teens text while driving, which makes a crash 23 times more probable. And the most likely place for a teen to die is behind the wheel.

Tim Hollister’s message is that your teen’s little trip to the beach isn’t nearly as harmless as it sounds. Driving is a dangerous activity at the best of times, but for teens, it can be more than they can handle – and parents need to know where to draw the line.

That line can be a lot harder to draw than even the most conscientious parent can understand. For Hollister, it took the loss of his son, Reid, to discover just how much he didn’t know – and just how much there was to teach.

A year after Reid’s crash, he joined a task force convened by the Governor of Connecticut in the wake of several multiple-fatality teen driver accidents. “Serving on that task force, I got a re-education about the dangers of teen driving,” says Hollister. “I learned that in the year I had supervised Reid’s driving, I really had not been the well-informed parent that I thought I was.”

Reviewing the available literature, Hollister found that there was an understanding gap for parents about the safety of teen driving. People assume that Driver’s Ed and a state-issued license should do the trick, but the reality is much starker.

“What I try to tell parents is that your son or daughter can be a straight-A student and a model citizen and have 10,000 hours behind the wheel – it doesn’t speed up their brain development,” he says. “It’s just not a matter of personality or training or good intentions. It’s something that takes time until they grow into adulthood.”

Ultimately, there is no such thing as a safe teen driver. Too many dangers are converging at once. Apart from the neurological immaturity, safe driving requires a great deal of time to master. 50 to 100 hours – the range within most parents operate – is simply not enough.

“The experts say it takes three to five years of driving before anyone can get into that category of being a safe driver,” Hollister notes. “It’s been shown that new drivers look at the perimeter of the car. Their objective is to make sure they don’t hit anything. So what they don’t do is, they don’t look down the road at the developing traffic situation, which is how you avoid a crash – to anticipate what’s coming 100, 200, 300 yards down the road.”

The kind of situational awareness that makes a safe driver comes only after more elemental skills are already acquired – making it extremely difficult for teens who are effectively thrown into the deep end of the pool and expected to learn everything at once.

Hollister points out, for example, that since teens are often taught by their parents in familiar surroundings, they have to learn to navigate on the fly. On their own, on their way to somewhere they’ve never been before, they can misinterpret the GPS and get distracted, or worse, get lost. “The only thing worse than a teen driver is a lost teen driver,” Hollister stresses.

All these dangers exist even before the specter of distracted driving starts to loom. And with the breakneck proliferation of electronic devices to teens, another poisonous element gets added to the witches’ brew – with laws, as ever, struggling to keep up with the statistics. Anti-texting laws do exist now in most states, but they don’t ensure that your teen will stay safe.

Neither, in Hollister’s opinion, do the licensing laws.

“Just because the teen has reached the age where they can legally drive doesn’t mean that it’s a good idea for that teen to start driving,” Hollister says. “This is the difference between the age of eligibility and the age of responsibility.”

With the new findings in neurology underlying his case, Hollister insists that parents should be far more cautious about their teens getting behind the wheel than the law requires. Not every 16-year-old is ready to drive, and it’s up to families to make responsible choices concerning their teens’ readiness. There’s a lot at stake, and you don’t get a second chance.

“The most important thing is for parents to understand and not kid themselves about how really dangerous teen driving is,” says Hollister.