Imagine: you’re waiting at a stop light, watching cars in the opposite direction turning left in front of you. Just as their light is about to turn from yellow to red, one last car speeds through, setting off the flash of the traffic light camera. As the driver passes in front of your car, you get a better look at him, and realize it’s not a driver at all – it’s a monkey!

Sound crazy? It’s not. It happened.

In 2009, a Phoenix resident (thought to be Southwest Airlines employee Dave VonTesmar) thought of a rather creative way to protest the traffic light cameras stationed throughout Arizona. These cameras, present in about a quarter of the U.S., identify traffic light violators mainly through capturing license plates, assuming guilt lies with the owner of the car. However, this may not be the case, and drivers who didn’t commit the offense are often ticketed. Only later is the owner’s driver’s license compared to the driver in the photo. In many cases, the DPS doesn’t even assess the photos themselves – they are sent to a private company. The cameras don’t differentiate between the owner of the car, and the actual driver. 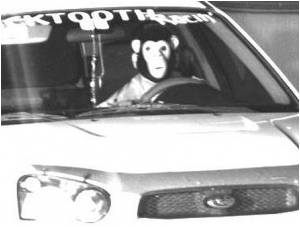 “Monkey Man,” as he has come to be known, challenged and exposed this fault by repeatedly driving through intersections and triggering the cameras while wearing a monkey or giraffe mask. The latest report showed at least 90 citations in 2009, none of which were able to identify the driver due to the mask. Though VonTesmar has admitted to owning the white Subaru in the photos, he has pointed out that his driver’s license photo does not match up to the photo of the monkey, and therefore it cannot be proven that he was behind the wheel.

“Not one of them there is a picture where you can identify the driver,” Vontesmar said. “The ball’s in their court.”

The controversy has highlighted the fact that without an actual police officer present to assess the situation, there is no legal proof that the owner of the car is at fault or that the driver was even being unsafe. Many believe that photo-radar cameras have caused more harm than good, with people speeding even more to get through the light before the flash goes off.