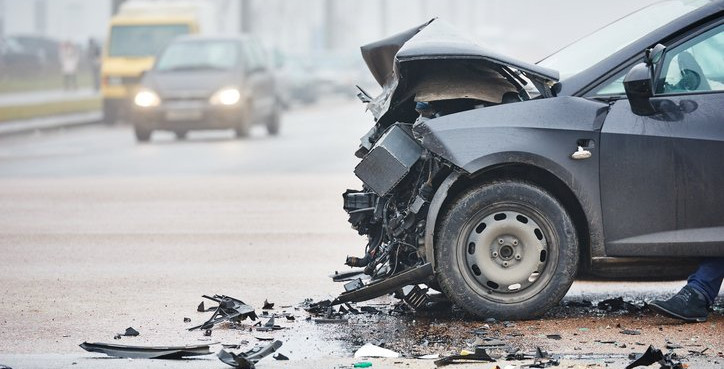 In just 23 days—since we published our first post to kick off Distracted Driving Awareness Month 2018 on April 2—more than 200 people have been killed in distracted driving–related collisions.

According to the National Highway Traffic Safety Administration, nine people are killed daily in distracted driving–related accidents and more than 1,000 are injured. The worst part: they’re collisions that could have been prevented.

“People become really upset when we see major incidents and we lose lives,” said Lisa Robinson, Senior Program Manager, National Safety Council (NSC), during an April 19 distracted driving webinar. “But nine people per day is 3,400 people a year, yet we take that as a way of life. Distracted driving is 100% avoidable.”

As Distracted Driving Awareness Month comes to an end, it is our goal to arm you with knowledge. The right knowledge. So that the next time you go to reach for your phone while you’re driving—or go to accept that incoming call—you’ll know exactly why you shouldn’t.

Anything that takes your attention away from driving is a distraction. Here are the three types of distraction:

Hands-Free is Not Danger-Free

While automakers continue to build advanced infotainment technology into their vehicles, it’s not – contrary to popular belief – the safer alternative. Recent studies have shown that hands-free, voice texting is more distracting than typing texts, as drivers look away more and the process itself takes longer than that of a typed text, Robinson explained during the webinar.

“A lot of people believe hands-free is safe, but that’s not the case,” she said. “Your brain cannot do all that.”

Researchers at Carnegie Mellon University used functional magnetic resonance imaging to study the brain’s reactions to specific challenges and tasks. While using a simulator, drivers were asked to listen to a series of spoken statements and judge whether they were true. The images below show that listening to those sentences decreased activity by 37% in the brain’s parietal lobe, an area that supports the actions and processes of driving. The conclusion? There is only so much the brain can do at one time, no matter how different the two tasks are, even if the tasks draw on different areas of the brain. The brain has a capacity limit. 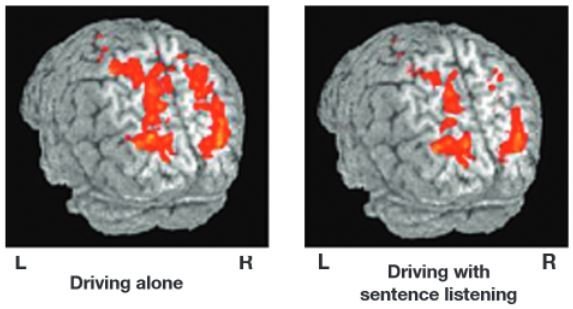 The common misunderstanding of how the brain processes driving largely contributes to the proliferation of distracted driving.

“But, we just take it as a way of life,” Robinson said, adding that within the past 30 days, 87% of drivers have admitted to engaging in at least one risky behavior while behind the wheel.

U.S. drivers need a solution “that allows a person to just drive,” she said, noting that there are technologies out there, like smartphone apps, for instance, that can reduce smartphone-related distracted driving.

eDriving, the parent company of I Drive Safely, released its Mentor for Families® app, a smartphone app that tracks and rates users’ driving habits based on six risky behaviors ranging from speeding to – you guessed it – distracted driving and smartphone use. Download it here.