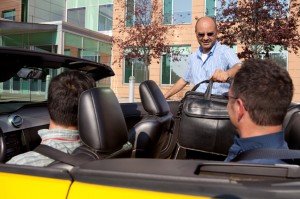 Do you want to save money on gas? Would you like to slash your annual greenhouse gas emissions by as much as 1,600 pounds? How about contributing to cleaner air in your local community?

Great, then you totally get the advantages of carpooling just a few times a week.

If everyone carpooled to work at least once or twice a week, there would be fewer cars on the road which would, in turn, lead to fewer accidents, shorter commute times, better air quality and a safer drive for everybody.

But that’s not going to happen overnight. If you’ve ever considered carpooling to work or school, here are a few advantages that might motivate you to join the ridesharing fun.

A lot of precautions are taken with new drivers that aren’t used to being behind the wheel on their own. One way that highway officials lower the risk of an accident is limiting who and how many people can be in a vehicle with a teen and sometimes any first-time driver.

Why are the number of passengers restricted? Because passengers can be a major distraction. Research from the Institute of Medicine has found that it’s riskier for teens to drive with other teens, and the more passengers there are in the vehicle the higher risk the is for an accident.

Each state sets its own rules and regulations for first-time drivers. Here are a few examples of passenger limitations:

You can still carpool for all of the benefits below, but you might not be able to drive all your friends to school or work. Also, keep in mind there are restrictions for when you can drive. Typically, driving is prohibited between the hours of 10pm and 6am unless you have a full license.

Something as simple as carpooling to work can have a huge impact on the environment. According to The Rideshare Company, the average vehicle releases ten thousand pounds of carbon dioxide every year. An overabundance of CO2 in the atmosphere is the leading cause of climate change that causes severe heat waves, hurricanes, droughts, etc.

Unless we seriously cut emissions it’s only going to get worse.

Carpooling to work is not only good for the environment, it’s good for your wallet too! Driving your own personal vehicle to work less means less wear and tear on your vehicle. You’ll fill your tank up less, and keep mileage off your tires and engine.

It may not seem like a lot, but the savings add up quickly. Other split costs include toll roads and parking permits.

Saving money and the environment aren’t the only perks. Often, carpooling makes for a less stressful commute. It’s also a great way to get to know somebody (and their taste in music) outside of the school or work environment. And when it’s not your turn to drive, you can eat breakfast, prepare for your 9 a.m. meeting or get some shut-eye instead.

Perhaps the greatest benefit to carpooling is driving in the High Occupancy Vehicle or HOV Lane during rush hour traffic. And if it makes you feel safer, most drivers have a tendency to drive with more caution when there is a passenger in their vehicle.

Employers can benefit from decreased parking costs and tax incentives by providing vanpool services for their employees. A vanpool is similar to a carpool except one employee drives a company-sponsored van carrying 7-15 other employees.

After meeting at a nearby central location, the vanpool allows riders to enjoy all the regular carpooling benefits at a shared low cost. And sometimes the driver gets to ride for free!