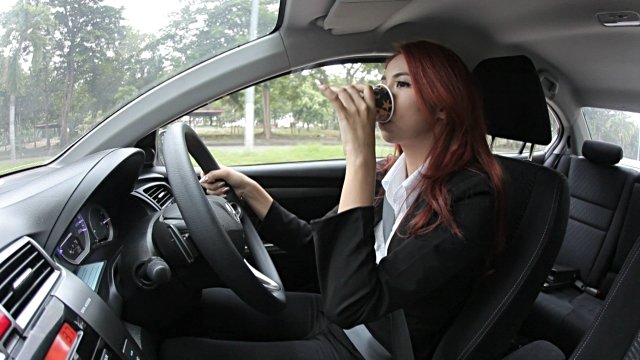 While phone use may be the “sexiest” distracted driving issue on everyone’s minds lately, the sin of gluttony behind the wheel is just as deadly – and has been a major issue for a considerably longer time.

Indeed, eating and drinking while driving just doesn’t get mentioned as much, thanks to the prevalence of the smartphone. However, it’s more than worth mentioning – eating while driving is arguably as dangerous, if not more, than using a phone.

The Hard Data on Distracted Driving

Munching on a snack while driving is something most drivers do regularly – an Exxon-Mobil study found that 70% of drivers eat and 83% drink beverages while they’re behind the wheel. However, it’s an action that can prove fatal.

Like phone use while driving, eating and drinking falls under all three types of distracted driving:

Food and/or drink requires you to take your hands off the wheel, focus on what you’re consuming, and, in certain cases, take your eyes off the road to look at what you’re eating. Similar to phone use, it’s one of the most dangerous distractions while you’re behind the wheel.

And because it’s been such a huge problem for such a long time, there is a laundry list of data out there that highlights just how unsafe it can be:

Beyond hard facts, we all have some experiences with the difficulties or eating and drinking while driving – our coffee-stained blouses and mustard-stained slacks are a testament to that.

Save all of your snacks for before or after driving – and take your lunch breaks when you’re stationary. There’s really no reason to eat while you’re on the road, even if you’re in a rush.

If you need your cup of joe to start the day, drink a cup before you head out on the road. The caffeine from coffee takes about 15 minutes or so to take an effect on you anyway – so this way, you’ll be awake and alert by the time you reach your office.

You may end up a little hungry, or a little grumpy from the lack of caffeine, but you’ll ultimately be safe – and that’s all that matters.