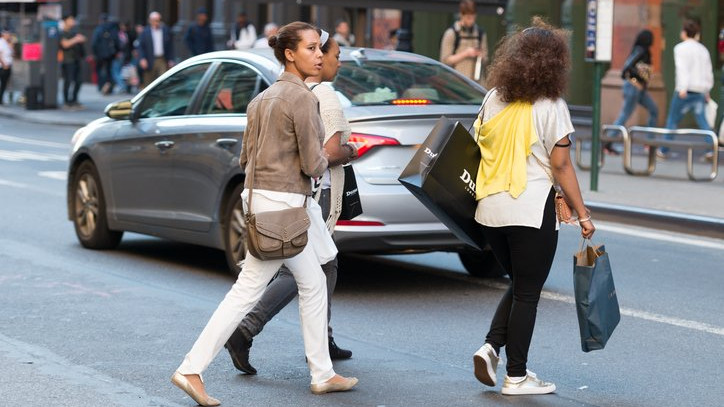 The resounding answer to this question is yes, but the severity of consequences varies widely throughout the US. Cities handle it differently, though the definition is mostly the same.

If you're not already familiar, jaywalking is defined as crossing a street in a non-designated area or when not permitted, and is a violation of traffic laws, even though you're a pedestrian.

The threat was first recognized in the 1920s when cars started to appear in cities, a change for pedestrians in crowded urban areas. As a term, the word "jaywalking" originated from a mocking term for rural dwellers who came to the city and gawked at all of the action and buildings, getting in the way of urbanites and causing trouble because of their distraction. By the 1930s, many cities had adopted rules for how pedestrians should behave on sidewalks and streets.

Even today, it's still a problem. In legal terms, you could be cited for a traffic offense in many cities if you don't cross properly.

While it's most commonly thought of as crossing a street outside of the crosswalk, it can also include walking when the walk signal is not illuminated or even starting to cross after the signal has indicated not to start crossing.

What kind of offense is jaywalking?

It varies between different jurisdictions and states, it's possible that jaywalking could be cited from an infraction up to a misdemeanor, typically accompanied by a fine. Even though it occurs without a vehicle, crossing the street in a non-designated area violates traffic laws.

In extreme cases, jaywalking offenses can include other citations like reckless endangerment or disorderly conduct when it creates the potential of harm to others.

It's handled differently from city to city

The consequences and fine can vary widely depending on the city and state. It can also depend on how big of an issue it is in the area.

The Los Angeles Times investigated the city's pedestrian problem in 2015 and found that police had issued 13,152 citations in the downtown area over the course of 4 years. That number decreases drastically outside of the downtown areas. One example stated a fine of $197.

In New York, rules had been lax until Mayor Bill De Blasio cracked down with a 10-year plan called the Vision Zero campaign. After an epidemic of traffic deaths, the New York Police Department began to cite jaywalkers more often. But among New Yorkers, where jaywalking is an unspoken rule of daily life, the enforcement is unpopular, even if for their own good. As New York Magazine said at the start of the crackdown in 2014, "nobody is going to tell residents and workers of this city not to jaywalk. But this might be a good time to offer up a few reminders about how to do it safely and effectively."

Other countries have different rules if any. The UK has no laws against jaywalking. China, on the other hand, has employed cameras, artificial intelligence, and facial recognition to shame illegal crossers. Jaywalking in Shenzhen will now result in your face being displayed on a large public screen and a message and fine sent right to your phone, according to South China Morning Post.

It's true that while jaywalking may be more socially accepted in some places like New York, but that doesn't mean it's legal. Even though most don't like to admit it, the rules are there for a reason. It might take an extra minute for a walk sign or to get to a crosswalk, but in most cities across the US and the world, it's worth the wait or walk.