You know that happy moment when you hit every green light and your whole ride is commercial-free? The right colors can make your day.

Timed traffic lights are set according to schedules that are supposed to coordinate with peak traffic hours. Cities need to monitor and update signal light time schedules at least every two years to keep these systems effective.

In Los Angeles, California, an ambitious project to go a step further and synchronize every red light in Los Angeles cost over 400 million dollars. Ask an Angelino and they are likely to agree that saving time on the road is well worth it. If implemented nationwide, synchronization could shave 10% off traffic congestion and 20% off air pollution. Congestion costs time, money, and lives. Big data can help improve how millions of people safely share the road. However, none of this would be possible without the traffic light!

Imagine congestion before the invention of the electric traffic light. Your morning commute would be a lot more chaotic—and downright dangerous.

1860’s: Traffic Lights Start with a Bang in London

Traffic jams are to city living what toast and jam is to breakfast. Long before motorcars, chaotic crowds made getting across town noisy, messy and dangerous. 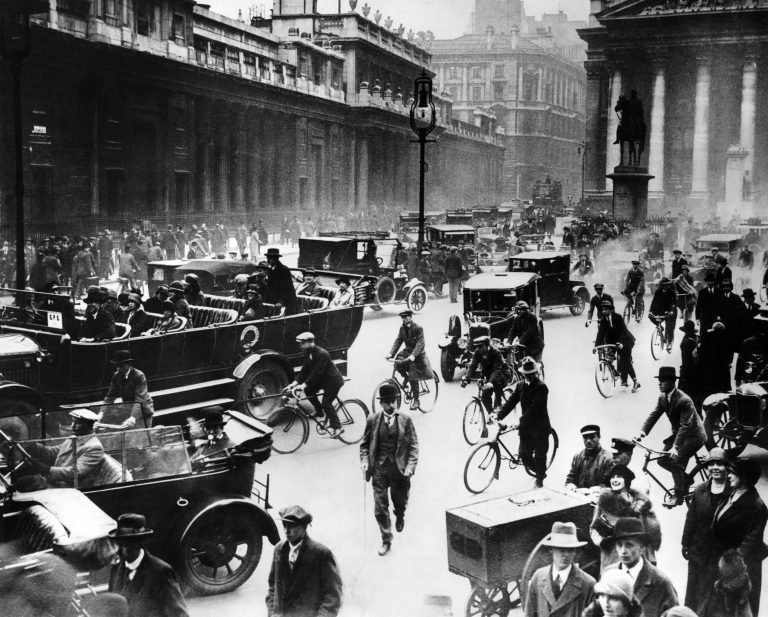 When was the first traffic light installed?

The first traffic light invented was in London in the 1860's, but it was hardly recognizable—or effective. It had been adapted from the railroad signal system by a railway manager, John Peak Knight, in 1868. The railroads used red gas lights at night to signal stops and green gas lights during the daytime. Knight installed a similar gas light, semaphore system at near London’s Westminster Bridge in December of 1868.

The life of the first traffic light signal was short lived. A gas leak caused one of the signal lights to explode on its police officer operator within a month of being installed. 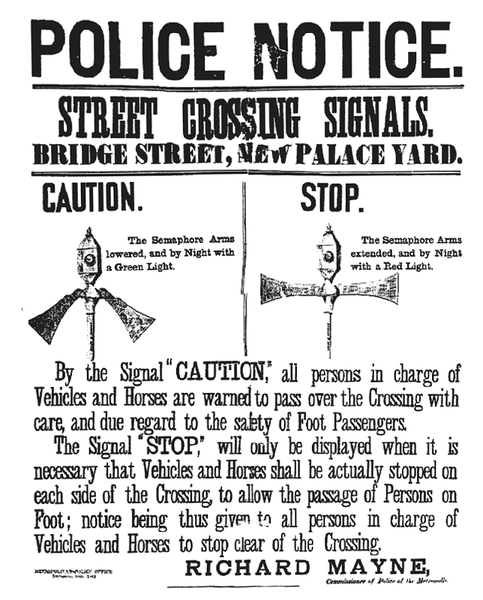 Early semaphore signals had arms that read "stop" and "move", or other variations. They were not standardized. Some were automatic, some manual.

Automating traffic signals stalled after the London incident. Forty years passed before cars crowding city streets urged the development of traffic lights in the United States. London would not see another traffic light until 1929.

The United States is a car culture like no other country. Unlike most European cities that started urban planning when horses were high-tech, many cities in the United States were designed around urban sprawl, suburban tracts, and motor cars.

In the early 1900s, the rush for traffic signals blossomed again. By the early 20th century, several patents were underway.

As traffic and cities grew, so did the race to solve growing traffic problems. The first traffic signals were semaphores. Semaphores are towers with moving arms signaling for traffic to stop or go. They could be manual or automatic. There was no consistent design. Various models were invented and put into place in cities as the need arose. 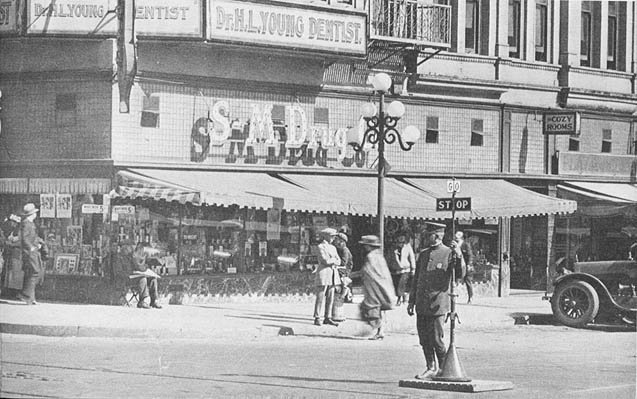 1910: The automated signs of Chicago.

In Chicago, automated signal signs were introduced in 1910. They didn’t light up, but they did create clear indicators for traffic to “stop” or “proceed” according to the labeled arms.

In 1912, Lester Wire was a police officer exhausted by traffic at Main Street and 200 South. He developed a manually switched stop light. The four-sided box, raised on a ten foot pole, looked like a birdhouse and was operated manually by an officer. The officer would flip a switch to change between the dipped red and green lights.

Like the 1910 semaphore, the first electric signal used words. However, the words were no longer written on arms that raised and fell. The words “stop” or “move” were on lights. The posts lit up on each of four corner-posts around an intersection. It was not automated, though. A booth with an operator was required to flip the switches.

Finally, in San Francisco the first red and green electric light system that could be operated automatically (or manually) was introduced in 1917.

In 1920, the first three-color light system was introduced in Detroit—aka Motor City, USA. The evolution of traffic light signals could not have a more appropriate context than Motor City. Ford Motor Company was founded in Detroit in 1903 (and other motor companies followed). Ford made cars affordable for more common people, rather than the wealthy, by creating larger scale factory production. 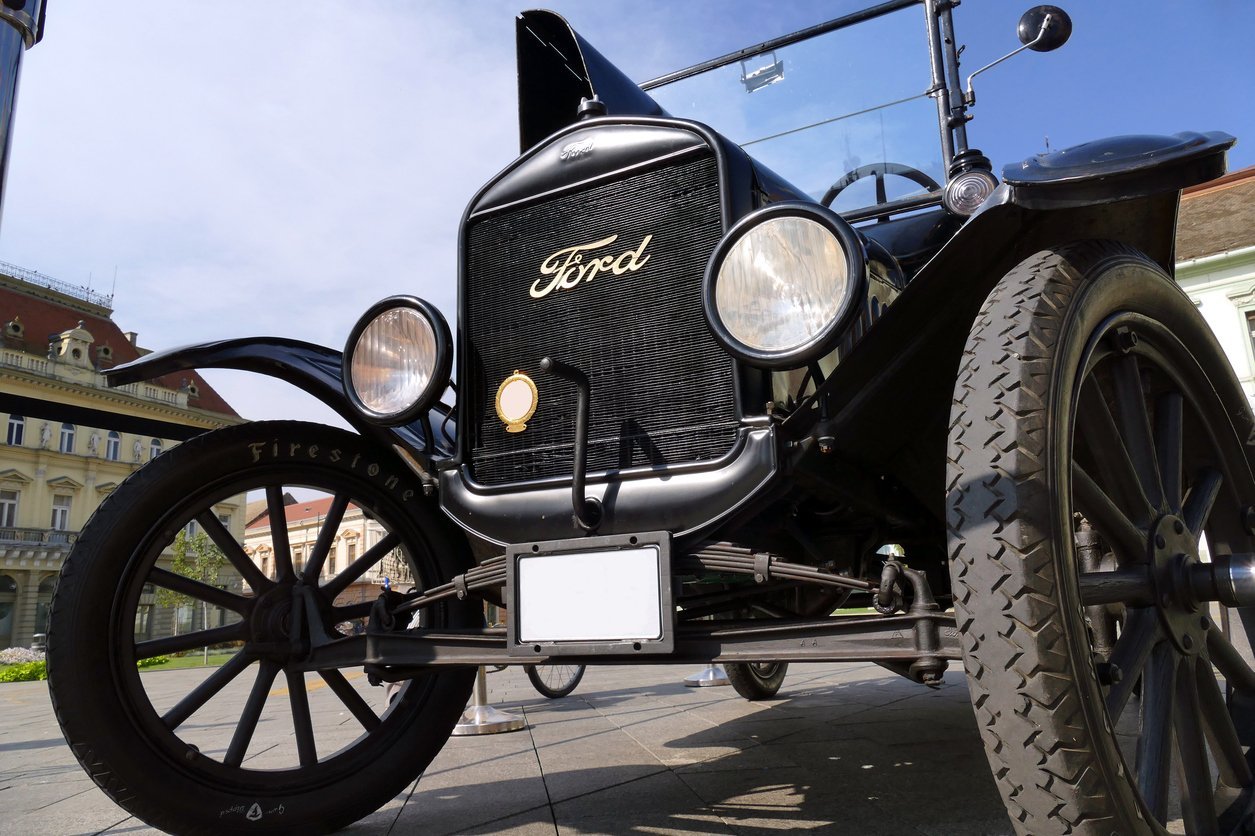 Ford's Model T (1921)
Factory production made for a new era of car ownership.

Stop and go were insufficient for the new volumes of cars zooming through intersections. Streets were full of new numbers of cars in addition to delivery wagons, bustling crowds, bicycles, horse-drawn carriages, and street cars. The introduction of the cautionary yellow light helped increase driver safety, decreasing accidents that come from running red lights. 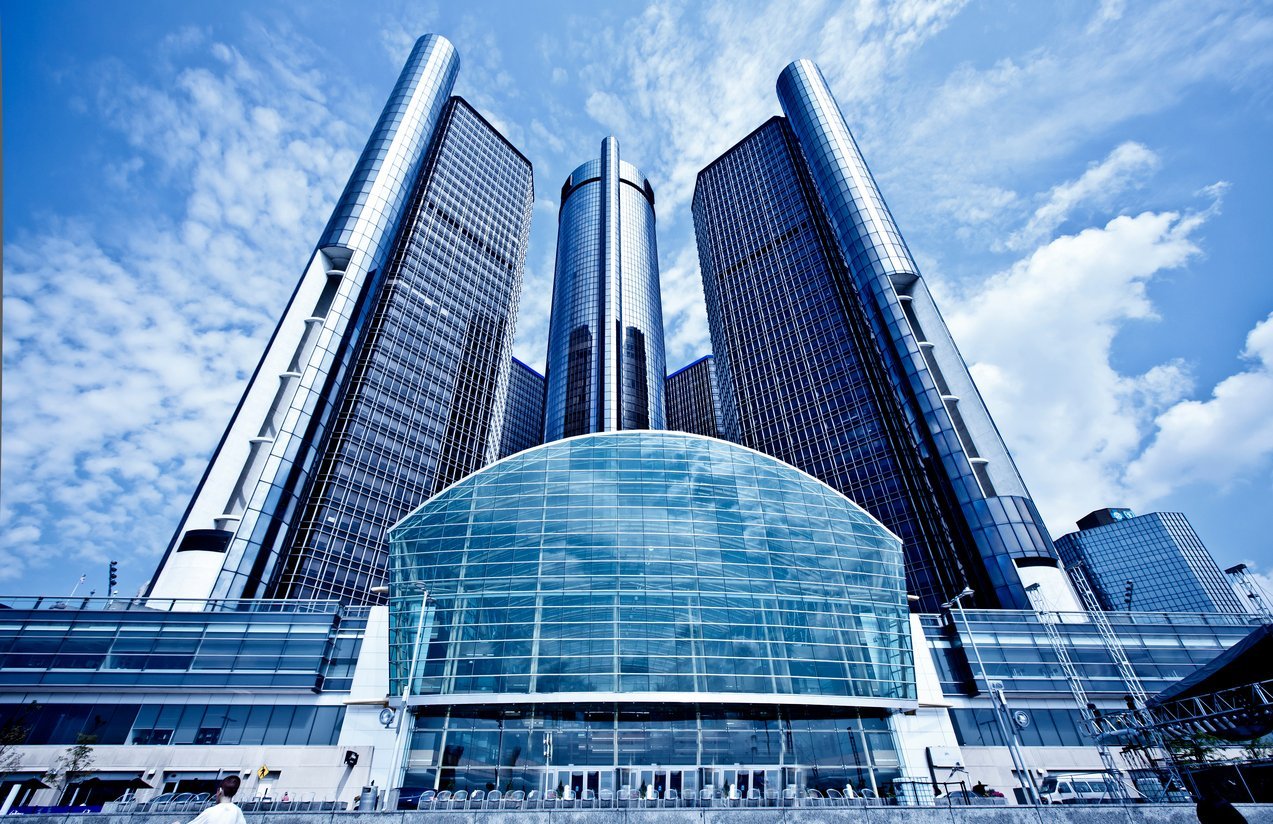 (Stop lights were incredibly important in chaotic city streets. Crosswalks weren’t even introduced until 1951. The first pedestrian fatality in the United States was in 1899.)

The development of the modern traffic light may have started in London, but it grew up in the United States. In Cleveland, an African American inventor named Garrett Morgan came up with an affordable, patented traffic signal. The yellow light made intersections safer than the old stop and go system. The new design was inexpensive enough that it allowed the installation of a lot more lights.

Morgan sold the patent to General Electric—and the spread of the traffic light was green lighted.

The Meaning of Colored Traffic Lights: A List of Electric Traffic Signals

Green means go. It is that simple, but it’s still best to check both ways for oncoming traffic that may not be paying attention or is running the light.

Yellow means slow down and prepare to stop. It does not mean full-throttle ahead. While you may get away with gunning it into the intersection, running a yellow can lead to tickets and dangerous accidents. 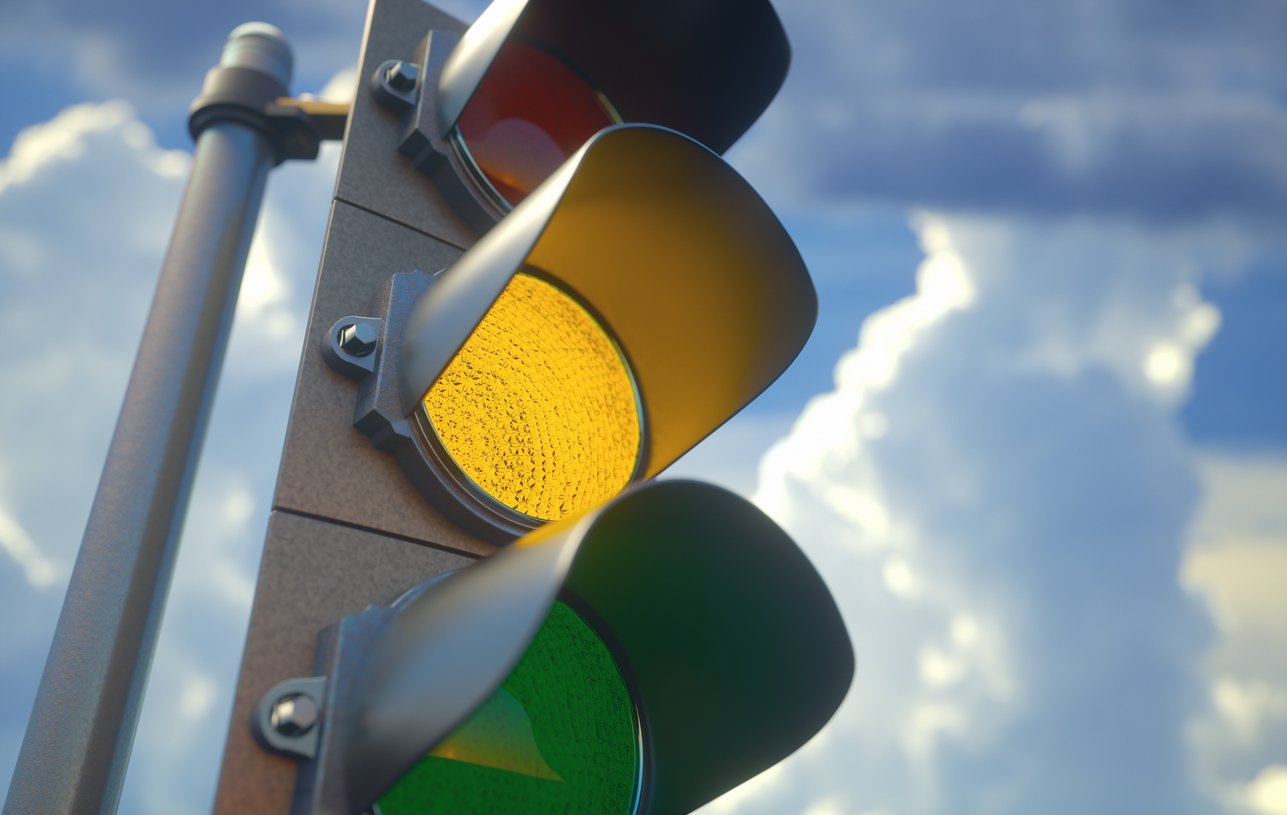 Yellow is a cautionary color. It means slow down. It does not mean "go faster".

Red lights are a clear and consistent warning to stop. Even where right turns are allowed on red lights, you must come to a complete stop before turning right. You must also yield to any through traffic, which has the right of way.

Red arrows mean you cannot turn right on a red in most states. The green arrow, in these cases, is the only time you can make the turn. However, you can take a right on a red arrow after a full stop in the following states:

Flashing Red is the same as a stop sign, generally used at four way intersections where there is minimal traffic. When arriving at a flashing red light, make a full and complete stop.

Flashing Red Arrows similarly mean to stop and then proceed to take the turn.

Flashing Yellow lights mean yield or signal caution, like outside of a fire station.

Flashing Yellow Arrows are part of a four-signal traffic protected turn traffic light. These are used in some states after a protected green turn signal, or arrow, but before a steady yellow arrow. When a flashing yellow arrow is shown, you can take the turn after yielding to pedestrians and traffic.

Traffic light meaning is fairly consistent across the board and various deviations. Green means it's safe to proceed (though you should still exercise caution). Yellow means caution and yield. Red means danger and stop. Always drive defensively and obey traffic signals.