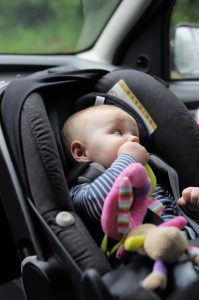 I got my license at 16, and for the remainder of my teenage years, I was a pretty typical driver. There was a speeding ticket. And one for rolling through a stop sign. Once I got pulled over for what can only be described as “dashboard drums,” and the curtain fell on my teenage years with a totaled Nissan Maxima that wasn’t entirely my fault.

In my twenties, my driving record was cleaner, but there was still a speeding ticket or two. (Or three.) But I had accepted my fate. I wasn’t the best driver in the world, but I wasn’t the worst, either.

And then something happened. All my poor driving skills vanished. Seemingly overnight, I became the responsible driver my passengers always prayed I’d become. I had a daughter.

Suddenly, my entire worldview changed. I assumed the role of protector, and I took the designation literally. My hands became permanently fixed at 10 and 2, my lead foot suddenly found the precise speed limit, and the cell phone was locked safely in the trunk. A lifetime of poor driving habits, instantly corrected by adding a seven-pound drooling lump to the back seat.

But it didn’t stop there— I became borderline fanatical. In the two-day period between having the child and leaving the hospital, I had to bone up on a lifetime of neglected defensive driving lessons. Suddenly I became very interested in the National Safety Council’s child car seat standards. Did you know that three out of four parents don’t properly use the child restraints on their car seats? I did. I also learned that the center of the rear seat is safer than the side, in order to minimize side impact in the event of a collision. There’s even a National Highway Traffic Safety Administration (NHTSA) seat inspection locator. I used it. More than once.

I learned that the Governors Highway Safety Association recommends child seats face the rear of the car for the first 12 months. I lobbied to have my wife drive everywhere, so I could sit in the backseat with my daughter, avoiding responsibility and staring at clouds. It didn’t last long.

Suddenly I was behind the wheel, and the world became a dangerous place. Everyone was driving too closely, and the road was a treacherous minefield. I became “aggressively defensive,” going miles out of my way to avoid busy freeways and unsavory intersections and honking at anyone who got within 30 feet of my car—just in case. I used to get annoyed with new parents who would always show up 20 minutes late, and then invariably blow it off with a shrug. But when I became that new parent, I understood. Safety came first.

When it was just the two of us in the car, it was hard not to constantly sneak glances at her in the rear view mirror, but because it was technically distracted driving, I managed to restrain myself. As she grew, I’d measure and weigh her regularly, so she could switch to the booster seat at the appropriate time.

Over the years I became a little less paranoid about driving with her. We’d spend 15 or 20 minutes each day in the car, and it turned into some great bonding time between us. For that 15 or 20 minutes each day, we were each other’s captive audience. As she learned to speak, we’d have fantastic conversations about trees, and clouds, and pretty much anything else she wondered about. When all the world is new, clouds can be utterly fascinating.

These days I like to think I’ve mellowed out a bit. My wife would disagree, pointing to any clock to reinforce her point. No matter where we go, we still arrive a perpetual 20 minutes late, and it’s all I can do to shrug.