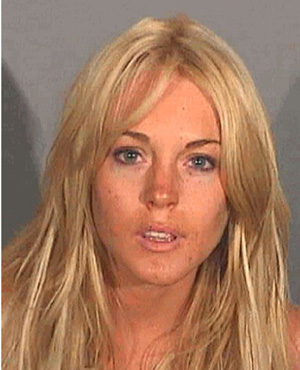 Reckless driving, DUI, lying to the cops…while this sounds like the beginnings of a bad movie script, this is in fact the reality of one celebrity’s driving rap sheet. Lindsay Lohan was in the news this week as she bounced from one rehab center to another to continue to serve her 90-day sentence for lying to the police at the scene of an accident.

Though she’s never won an Academy Award, the actress could definitely earn a terrible driver trophy.

Here’s a quick hit list (no pun intended) of the star’s crimes behind the wheel, and the approximate number of points she has on her record.
Driving Under the Influence: 2 Points (actually 4 points, since she was caught twice)
Reckless Driving : 2 Points
Hit and Run (In California and New York): 2 Points
At Fault Collision: 1 Point
Driving on a Suspended License: 2 Points
Running a Red Light: 1 Point
Lying to a Police Officer: Misdemeanor (No driving record points)
Total points: 10-12

It’s obvious someone wasn’t paying attention in drivers ed class. Here’s a helpful list of a few lessons the actress could benefit from if she used her down time to brush up on her driving skills with a California traffic school class.

1. Effects of drugs and alcohol on driving behavior: Obviously she doesn’t understand the dangers of drinking or doing drugs before driving. She’s been lucky so far, but in a traffic school class she’d learn the harsh realities her actions could cause.

2. Leading causes of crashes: Ms. Lohan has been involved in multiple accidents, including 2 hit-and-runs. So maybe she needs to a refresher on what behaviors behind the wheel could cause a collision?

3. Safe driving techniques: It’s possible the star just doesn’t know how horrible a driver she is. A basic brush up on the dangers of speeding, disobeying traffic laws, and endangering others might remind Lohan how lucky she is to have a driver’s license in the first place.

The irony in this situation is that while she could definitely benefit from traffic school, Lohan wouldn’t be able to improve her California driving record much. She would only be eligible to hide one traffic violation and one point per 18 months. Let’s just hope the next film she signs on for is NOT “Fast and the Furious 7“!