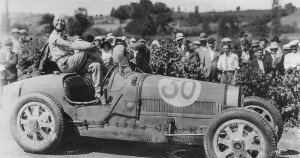 If you were to approach anyone on the street and ask them about females in professional racecar driving, their first answer would probably have something to do with Danica Patrick. The most successful female driver in the history of Indy Car racing and now a prolific, successful NASCAR driver, Patrick is indeed a cultural fixture in the minds of most Americans today.

But to say she was the first woman to have success on the race track would be a severe discredit to those who came before her. And we’re talking decades before, when the idea of a woman earning a drivers license was absurd.

Here are three women who were not only successful drivers, but were accomplished athletes in their own regard.

You can’t discuss female driving pioneers without mentioning Helle Nice. A French dancer and model, Nice was a born thrillseeker who started competing when a skiing injury abruptly ended her dancing career. In 1929, she not only won an all-female Grand Prix at Autodrome de Montlhery, but also set a new world land speed record for women. Within two years, she joined the male racing team at Bugatti and proceeded to compete in various Grands Prix in France.

Although she never won a race, she was nonetheless a competitive athlete, placing high in various races and continuing to compete through the 1930’s. In 1943, she settled down in the French Riviera amidst the German occupation of France in World War II.

Nobody encapsulates the Renaissance woman spirit better than Denise McCluggage. As one of the few working female journalists in America in the 1950’s, she caught the racing bug while on assignment and later transitioned to professional racing while working as a sports journalist for the  New York Herald Tribune  . Driving a variety of cars, including Jaguars and Maseratis, McCluggage eventually gained the respect of her male counterparts as she competed in a number of races in the 50’s and 60’s, including the Sebring International Raceway and the Monte Carlo Rally.

Denise McCluggage retired from auto racing in 1963, but continued to make a mark on the auto world as a founding editor of  AutoWeek  magazine. She remains a Senior Contributing Editor to this day, and hands out dollops of valuable automotive information for car enthusiasts everywhere.

It’s not surprising that one of the most celebrated female rally drivers of all time comes from an equally lauded driving family. Pat Moss, daughter to driver Alfred Moss and sister to legendary F1 driver Stirling Moss, was an incredible rally car driver with a long and storied racing career. Moss started early, at the age of 18, and over the course of 15 years amassed a large number of successes on the rally circuit. This includes three wins and a whopping 11 podium finishes in rallies all throughout the world, along with European Ladies’ Rally Champion honors in five separate years. To this day she remains one of the most noteworthy drivers in the international rally circuit.

While these aren’t the only women who opened the doors to a sport largely dominated by men, they proved that you don’t need to have a Y chromosome to succeed behind the wheel as a safe, responsible defensive driver .