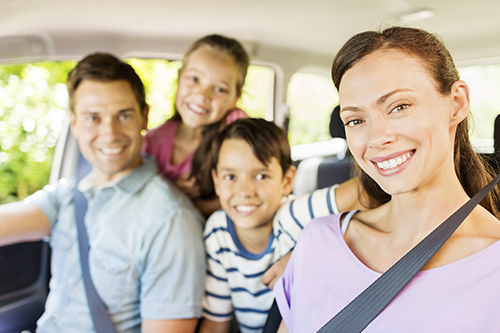 Being out on the open road is an adventure! The sites, the sounds, the beautiful scenery… But as most of us know, being on the road can also get monotonous. And if you have kids, the monotony starts to set in sooner rather than later.

So, to keep your mind (and little minds) busy, and to make time fly a little faster while on your journey, here are some top road trip games that are pretty darn fun.

I Spy, of course! This is one of the most classic road games ever invented. Start with one person stating “I spy with my little eye something…” and insert the color of the object, or say “…that begins with the letter A” or add in any number of descriptors…small, famous, etc. There are endless possibilities for “spying” something on a road trip. Try to make it interesting by “spying” famous landmarks or other new or different sites. Just make sure that the players who are guessing will be able to view the object for a couple of minutes so they have time to figure it out.

License Plates. A game that really makes you realize how many other people are traveling from other places—just like you are! It’s a simple game, really. The one who identifies the most states out of a certain time period wins. Younger children can be challenged to identify letters in alphabetical order and the first one to Z wins.

20 Questions. This game gives kids a chance to ask another question besides, “Are we there yet?” Designate one person to pick a specific “thing” in their mind and have players guess what it is. Start with question number one, “Animal, vegetable or mineral?” From there, players can ask any type of question to figure out what the “thing” is. “Is it blue?” “Is it huge?” “Does it rhyme with…?” Only 20 questions are allowed and if you reach number 20 without figuring it out yet, everyone is allowed one last chance to guess what the thing is before it is revealed.

The Picnic Game. If you’re working on memory-building, this is the game to play! Start with the first player saying “I went to a picnic Saturday and I brought…” and have them pick an item starting with A, the first letter of the alphabet. The next player must repeat the same opening phrase, then state the first item mentioned that starts with the letter A, and then add an item that starts with the letter B. This continues with each player adding an item starting with the next letter of the alphabet and repeating the ones already stated until you reach letter Z. You’re gonna have to get creative with letter X!

Name that Tune. Who can name the mystery song first? Pick someone who can hum, sing or whistle—preferably on pitch—and have them perform a song they think no one would know. The person who guesses it gets to be the next song performer. Try mixing it up a bit by choosing a musical theme or genre such as country western, top 40 songs or Justin Bieber hits (have fun with that one mom and dad!).

Rock, Paper, Scissors, anyone? You’ve got to be living under a rock if you haven’t heard of this one! But if not, it’s a game of chance and you need to be the one that ends up with the upper hand. Two players put their hands behind their backs. In unison, the two players make a fist with one hand and say, “rock, paper, scissors” and immediately reveal which one they have chosen by the hand gesture they have made representing a rock (fist closed tight), paper (hand extended out flat) or scissors (two fingers out in a V-shape representing a scissors). The scissors beats paper because it can cut paper, the paper wins over rock because it can lay on top of a rock, and a rock beats scissors because it can smash a rock. Oh, hours of endless fun until all possibilities are explored and someone gets tired of the whole thing.

Odds and Evens. Basically the same premise as rock, paper, scissors but with different hand gestures and outcomes. One player picks odds, and the other picks evens. They then shake one of their fists and count “one, two three,” and stick out either one or two fingers. If the total is an odd number, the player who picked odds wins and the same goes for evens.

Hope you are now well-equipped for some quality time spent on the road with friends and family. And hey, if these games don’t quite do it for you never be afraid to make up your own. Get creative and most of all, have some fun out there in the wild blue yonder.